It’s time to start making Christmas cards! Okay, it’s probably past time, and I’ve been creating them for a couple of weeks, but here’s my first blog post about one. 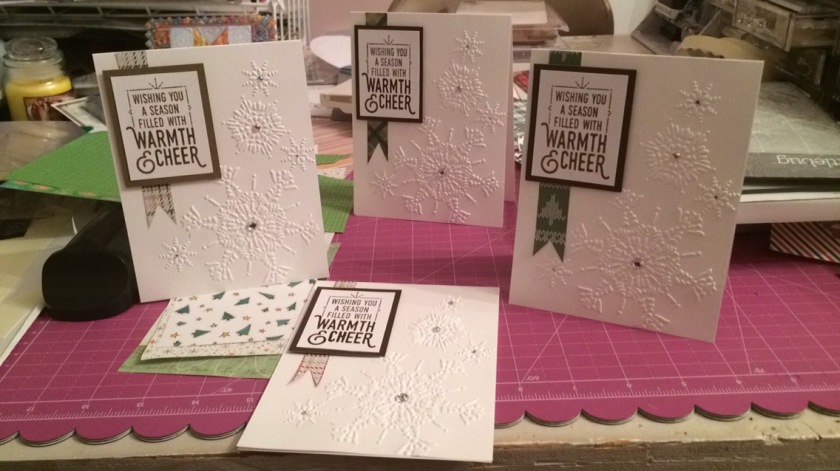 It may be October, but for crafters, it’s Christmas card season!

The other day, hubs and I figured out a new way to keep each other company while I remained productive with crafting. The result was the outside of four winter/Christmas cards finished. They’re pretty simple, but simple can be elegant sometimes. Our wedding, for example. (Or at least that’s what I was trying for back then.)

Pardon the mess behind my desk, but this is the only shot of the four together so far.

I have two custom Christmas card orders right now along with the niggle of something bigger in the works (we’ll see if it goes anywhere), so I figured all four would go one place or the other, or I could split them up.

I used all Stampin’ Up materials for these except for the bling – Whisper White cardstock, the retired Northern Flurry embossing folder, paper strips cut into banners from one of their retired 6×6 Christmas paper packs (I didn’t write down which one), Soft Suede and Early Espresso inks with matching cardstock, and the “Wishing you a season filled with warmth and cheer” sentiment from the set “Wrapped in Warmth.” The rhinestone bling is from Michael’s, SU, and CTMH.

I’m still stamping the insides of three of them. So far I have “Merry Christmas to You and Yours” (from SU’s “To You and Yours Too” set) on the inside of the Soft Suede version, shown below. 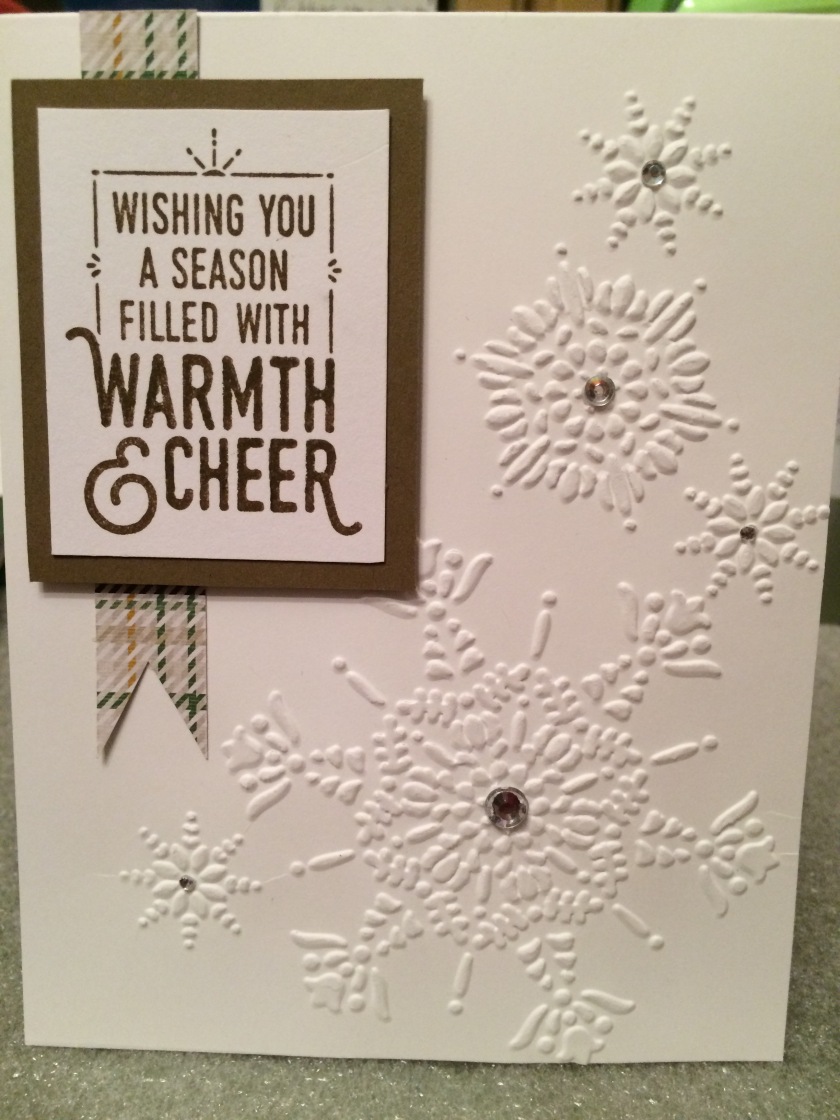 I love how the embossing just pops off the card. I had originally wanted the snowflakes to come cascading from the upper-left corner but realized after I cut the cardstock that that wasn’t going to be possible because of the direction I’d cut it. And I had thought to only have a smaller 1/4″ strip extending from top to bottom but didn’t like how that interrupted the little snowflake down there…so after some brainstorming with hubby, since he was in the room, this is what we decided looked best. And I’m pleased with it. I think it like it better than my original idea. (Not that I won’t try that original idea again some year. 🙂 )

Thanks for reading! If I can make Christmas cards for you sometime, send me a note or visit thelittlewhatnotshop.etsy.com. 🙂

I’m a newish Stampin’ Up Demonstrator and would love to help you purchase or use crafty items, so please let me know if I can be of assistance! Click here to shop with me now!

I have my own little Etsy shop at http://thelittlewhatnotshop.etsy.com where I post cards and scrapbook layouts for sale as well as craft supplies, antiques, collectibles, and whatever else catches my fancy.

My Facebook Business Page: Constantly Creating / The Little Whatnot Shop

My Facebook Business Page: Constantly Creating / The Little Whatnot Shop